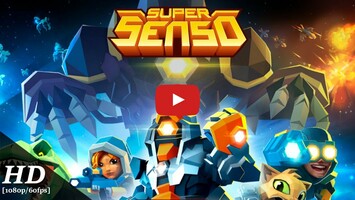 Advertisement
Super Senso is a turn-based strategy game in which two players face off in exciting online battles that last less than five minutes. The first to destroy the enemy base wins.

The gameplay in Super Senso is simple enough to be straightforward and intuitive, but complex enough to have a wide margin for strategic outplays. On each turn, you get a certain amount of 'senso gel,' which you use to move your units around the battlefield. Of course, attacking your enemy directly isn't always the best strategy. As you get the hang of the game you'll discover all kinds of interesting rules that let you develop unique strategies.

In Super Senso you have more than twenty unique characters at your disposal, each of which can be leveled up as you play. Each unit has its own attributes, with both strong and weak points. Learning how to effectively combine your units is fundamental to coming out victorious. Sometimes, for example, a lowly soldier can be much more useful than a powerful armored tank.

Super Senso is an excellent turn-based strategy game that offers much more entertaining and deep gameplay than most of its peers in the Android catalog. On top of that, the game has great graphics and an enormous number of units and levels in which to fight.
Reviewed by Andrés López Translated by Nick
Advertisement

There are opinions about Super Senso yet. Be the first! Comment Car Parking Multiplayer
Drive around an extensive map for a realistic parking experience
Mobile Legends
An excellent, but shameless, League of Legends clone
Clash of Clans
Crush enemies and lead your clan to glory
Scary Teacher 3D
Escape the terrifying teacher!
Bus Simulator Indonesia
Drive a bus through Indonesia with this simulator
Clash Royale
Clash of Clans characters face off in epic duels
Lords Mobile
Lords Mobile: Build an empire to destroy your enemies
Vegas Crime Simulator
Try not to get caught breaking the law!

Stickman Archery Master
Shoot arrows at all the enemies you can see
FishBrain
A platform for anyone who loves to fish
Azteca Deportes
Follow your favorite sports with TV AZTECA
Caesars Slots
Slot machines with a lot of history
Lig TV
Follow the best Turkish soccer on this platform
Razer Cortex Games
Play the best games and win prizes
Galaxy Attack: Alien Shooter
An old-school alien killing game
Just Hitalick!